SIBO & Gluten: The Truth You Need To Know with Dr. Lisa Shaver 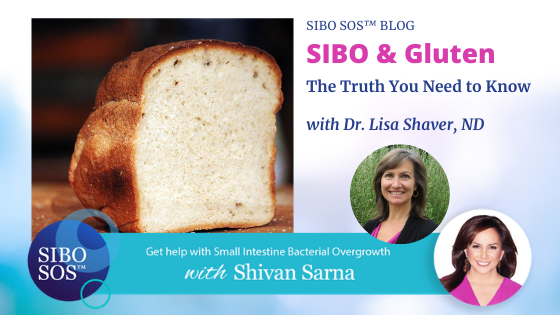 Should you commit to a gluten-free diet if you have SIBO?

It’s one of the most common questions we hear from the SIBO SOS™ community.

Some practitioners think only those with Celiac Disease need to be gluten-free.

Others think gluten is evil and should be avoided by everyone – especially those with gut issues like Irritable Bowel Syndrome (IBS) or Small Intestine Bacterial Overgrowth (SIBO).

So what is the truth about gluten and SIBO?

Today, I’m going to explain Celiac Disease, non-Celiac gluten sensitivity, their connection to SIBO, and (hopefully!) empower you to make the right decision for you about gluten. This blog post is based on information I have learned from interviewing Dr. Lisa Shaver, ND.

Gluten is a protein found in grains like wheat, rye, barley, and spelt. It also is a common contaminant in grains that don’t naturally contain gluten, like oats. Gluten is a large molecule with two sub-molecules: gliadin and glutenin.

What Is Celiac Disease?

But, about 5% of people who DO have Celiac Disease don’t have the gene for it, either.

Basically, this means having the gene for Celiac isn’t a sure way to know if you do or don’t have Celiac Disease. Instead, you need to be tested for Celiac Disease specifically using either a blood or stool test.

If you DO have Celiac Disease, you must stop eating gluten. You need to stay on a gluten-free diet for the rest of your life.

If only 1% of the population has Celiac Disease, does that mean only 1% of us need to avoid gluten?

It’s not quite that simple.

Doctors once believed that either you had Celiac and must avoid gluten, or you could tolerate it without any adverse symptoms. What the evidence shows, however, is that someone can have non-celiac gluten sensitivity, and that can cause a whole range of symptoms.

As mentioned earlier, gluten has two sub molecules, gliadin and glutenin. As a molecule itself it’s already very large and hard to digest for a vast majority of people.

While you may not think you have a gluten sensitivity, you really need to test for it to be sure. Cyrex is one laboratory that does offer the non-celiac gluten sensitivity panel along with the celiac panel. It may be an extra cost, but arming yourself with information could definitely be worth it, especially if your results are positive.

The Role of Gluten When It Comes to SIBO

SIBO, celiac disease and non-celiac gluten sensitivity appear to intertwine. While you may eliminate gluten, if you’re still heavily eating carbs, you may still have symptoms.

In many instances, patients who were celiacs, or who had non-celiac gluten sensitivity who eliminated gluten, may have felt great for a long time. But after eating gluten-free foods like cookies, English muffins, tortillas and gluten-free cakes, or even rice, sorghum, millet and nut flours like almond or cashew flour, found that they still had bloating and diarrhea.

If you have SIBO, indulging in a gluten-free carb-heavy diet might be the cause of a whole list of uncomfortable symptoms: burping, reflux, heartburn, abdominal pain, stomach pain, gurgling, distention, bloating, gas, diarrhea, constipation, alternating diarrhea constipation, and painful bowel movements.

This shows that it isn’t just gluten, but processed grains in general that people with SIBO really struggle with in terms of digesting them properly.

Another issue is mis-diagnosing a gluten intolerance or Celiac Disease as SIBO.

Why doesn’t everyone with the gene for Celiac Disease actually develop the condition?

The only problem is that leaky gut is incredibly common and can be triggered by everything from medications, to environmental toxins, to diet (yes, eating gluten!), and stress.

Should I Go Gluten Free?

Even with all we know today, there still isn’t a one-size-fits-all answer to this question.

However, there are certain steps you should take BEFORE eliminating gluten. If you eliminate gluten without testing for Celiac first, for example, you will never know if you have just a sensitivity or a potentially life-threatening autoimmune condition.

And even if you decide to go gluten-free, replacing gluten-containing foods with GF replacements may make your SIBO symptoms WORSE!

Do you have questions? Need more information about gluten, SIBO, and leaky gut?

Join Us For An All-New Masterclass with Dr. Lisa Shaver About Gluten

Dr. Shaver is a naturopathic physician, licensed acupuncturist, and holds a master’s degree in Oriental Medicine. She specializes in Celiac Disease and non-Celiac gluten sensitivity (NCGS).

And the best part? We’re offering a special price for this Masterclass: just $27. This information is critical to healing (and so misunderstood) so we are lowering the price to make it accessible to as many people as possible.

29 thoughts on “SIBO & Gluten: The Truth You Need To Know with Dr. Lisa Shaver”