Everything from icky oral thrush, to embarrassing vaginal yeast infections, and of course, as a major cause of SIBO… candida is very much the “fungus among us.” It affects millions of people and can cause real havoc on the body, especially in the gut.

Luckily, we have expert candida fighters on our side – like Dr. Tom Messinger.

Dr. Messinger is a licensed Naturopathic Doctor with a unique history. Prior to becoming an ND, he was a Registered Nurse for 23 years, spending most of his career working in inner city Emergency Departments/Trauma Centers. He is founder and Clinic Director of Portland Natural Medicine in SE Portland.

Recently, I was able to speak with him about the pervasive issue of one of SIBO’s main causes: candida.

So, what exactly is Candida?

Simply put, Candida albicans is the most common form of fungal yeast infection in people worldwide – affecting mostly the mouth, gastrointestinal tract, skin, genitalia, and urethra. Its symptoms can range from the annoying to debilitating… everything from itching and pain to filmy white patches and blistering rashes.

When it comes to digestive symptoms, the “usual suspects” of bloating, cramping, constipation, diarrhea and even recurrent sinus problems can signify a candida infection. However, you may experience symptoms with a broad range, which is why candida itself is a tricky character to identify just from symptoms alone.

Obviously, bacteria is all around us in the natural world. In our gut, a balance of good bacteria versus bad is what keeps us healthy and our digestive system moving along. However, there are specific links between medications we may take and the creation of a bacterial imbalance in our gastrointestinal tract, leading to candida.

So what are these specific risks?

Once candida is suspected, Dr. Messinger has a series of preferred tests he will run to pinpoint the problems and address each, one by one.

There are several lab tests that Dr. Messinger recommends for his patients, such as:

Not all tests are needed for every patient. It mainly depends on what is required for each situation and the indicators discovered. Sometimes cost is a factor for the patient and this needs to be considered.

One thing to note about candida – it can be stubborn to treat, and make take nine months to a year to clear. The key to ridding yourself of candida is a competent doctor’s care and consistency.

Dr. Messinger is quite particular about the herbal medicines he likes to use for his SIBO patients, and in a very particular order.

MC-PZ. For days one through four, Dr. Messinger will administer a formula called MC-PZ by Beyond Balance.  It’s a combination herbal that has antimicrobial and antifungal properties.

Because many of his patients are sensitive, Dr. Messinger starts them on a lower dose – one drop twice a day. Then days five through eight will have them rotate to something else.

Oil of oregano. Popular with any functional healthcare providers in the treatment of SIBO, Dr. Messinger next puts his patients on this twice a day. At the same time, he might include a formula called Phytostan by Integrated Therapeutics, one cap three times a day.

Mycoregen. During days nine through twelve, Dr. Messinger will give his patients a formula called Mycoregen by Beyond Balance. A stronger medicine, he proceeds with caution and starts people out at one drop twice a day. They go through a twelve-day cycle and then repeat it until results can be seen.

Additional formulas may include the antiparasitic artemisinin, Neem Plus by Research Nutritionals, and the candida offerings from Biotrex.

Biofilms are a thin membrane organisms create that functions as a roof-like structure. The biofilms are made up of polysaccharides, lipids and metals that are relatively hard to penetrate.

To break through the biolfilm barrier, Dr. Messinger has used serrapeptase, which has been helpful to some patients. In addition, Dr. Messinger has experimented with Beyond Balance formulas like BFM-1, which contains a Guggul lipid. Guggul is an ayurvedic herb and it’s good for breaking down these elusive organisms.

In this process, not only is the biofilm being broken up, but the organisms underneath become more accessible to the treatment. That can cause some die off, where the organism is going to produce more toxins, either because it’s being killed off and it breaks apart and releases toxins, or it’s trying to defend itself. The die off process can be uncomfortable, but should subside once the toxins released have been excreted out of the body.

Binders used during the die-off phase can also help – such as chlorella and bentonite clay (use under the care of a competent functional medical professional). 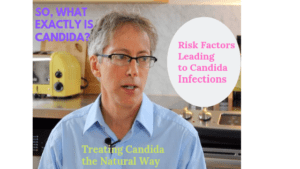 “I want to say one other thing about candida, Shivan.  It is often thought, in the holistic medical field, that in candida overgrowth there is a high probability of heavy metal toxicity.”

So, you’ll want to investigate your level of heavy metal toxicity, too, in partnership with your physician.

What have you done to treat your symptoms that has worked or hasn’t worked?

17 thoughts on “SIBO and Candida Overgrowth with Dr. Tom Messinger”