What 7 SIBO Experts Think About Coffee (Is Coffee Friend or Foe For SIBO & IBS?) 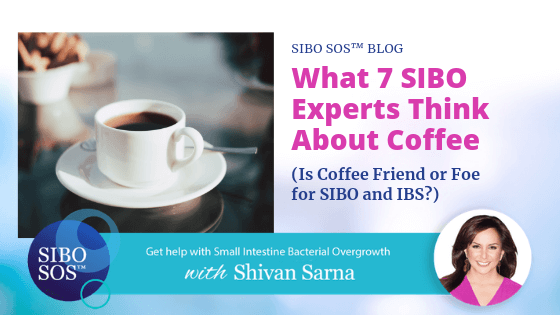 Is there anything better than a hot cup of coffee in the morning?

Because this is one of my #1 questions, I’ve made it a habit to ask as many expert doctors and practitioners as possible what their opinion on coffee is.

Today, I’ve rounded up a bunch of opinions on coffee and I’m sharing them with you.

“On my handout it says “weak coffee is okay,” 1 cup a day.  But [do I think it’s good beyond that], no. If people are drinking coffee and they’re getting 10 ounces, 12 ounces, that is gonna work against the gut.

It’s acidic. It’s irritating. And if they have diarrhea SIBO –  coffee, caffeine stimulates peristalsis action. It drains the adrenals. It interferes with good sleep. “Oh, but, doc, I just have one cup before 9:00 in the morning!”  Yeah, well, there’s no law that says it’s detoxed [before the end of the day].

Coffee tends to wake you up at 3:00 a.m. [That is] the liver clog, the liver time on your Chinese clock. This is the time people wake up because they’re on a drug that their liver has to detox: caffeine. And then you wake up kinda wide awake, right?

If people handle a cup or two of a weak coffee, all right. That’s fine. I don’t think a lot of it is going to be helping them in all of these different wants that we’re trying to get them to be healthier.”

“Coffee is stimulating.  A lot of people are dealing with adrenal fatigue and they drink coffee to keep them up. Yes, there’s the “Bulletproof” that’s supposed to be fungal free but most coffee that you go and get at Starbucks – there’s a lot of fungus on those beans, those funguses, the aflatoxins and other things. Not good for you. It thins the digestive lining. It actually thins out; the caffeine thins out the digestive lining.

The caffeine will stimulate phase one liver detoxification but won’t do anything for phase two.  People start to really like oh, motor up and get phase one stimulated and then phase two just lags behind. And so that’s a problem as well. I’m not a fan of coffee.”

“I don’t like to generalize about that because I think a healthy body can enjoy coffee. I think coffee is a problem for many sick people. Coffee is not a healing agent for sick people.

Why is that? Many reasons. The methylxanthine, the acids in coffee can be very difficult for a bowel. For people with SIBO, coffee is often used almost as a laxative. It stimulates that. Now that could be good to move the bacteria out if it’s constipation predominant or there’s an interruption motility to the point where the bacteria are kind of stuck in the small intestine. The coffee could be good.

But in general, I think if consumed to excess it taxes the adrenal glands because it’s so stimulating and that can be a problem. Very reasonable use of coffee is really a great thing. Now there’s the Bulletproof Coffee, which at some protection as it were and some positive attributes to its negative ones. But I do I think it’s overused.”

“Coffee is a tricky one. If you had asked me ten years ago I would have said it was bad, bad, bad, but now they’ve done a lot of studies on coffee. Coffee that’s organic and free trade, in moderate amounts, actually seems to be a good antioxidant and anti-inflammatory.

“I think [coffee] is person specific.  I think all the research out there is telling us that coffee in moderation, like alcohol, can be healthy.  There’s a lot of rich antioxidants in coffee, amongst other things.

For those reasons, I say, if you can tolerate it great.  I would say most of my SIBO patients are adrenally fatigued and coffee is that thing that keeps their adrenals boosted. They’re just trying to get through.  Our ultimate goal would be to get at what’s underneath that. Help them so that they can get off coffee, because more often than not it’s a false energy and can ultimately burn you out more.  Burn those adrenals out more.

Chemicals are used to decaffeinate coffee typically. French water processing helps to remove the caffeine in a healthful way that’s just not adding more chemicals to your cup. If you’re somebody who still wants that cup of coffee but you’re caffeine sensitivity, the decaf version is great.”

“Coffee generally is okay. There’s a few caveats to that. And one of them is I would want that person to have organic coffee and there are some issues about mycotoxins. Mycotoxins are toxins that are released by fungi that can remain in certain foods and one of those mycotoxins is an aflatoxin in peanuts and that’s one reason we avoid peanuts besides the fact that it’s a very inflammatory substance.

But with coffee, you know, I’m from Seattle.  We tend to line up when we see a green awning, you know. I drink a cup of coffee a day. I don’t think generally there is a problem. The caveats would be the mycotoxin if you’re sensitive to fungi.

The other thing is if you are a very nervous person and some people that have a very poor what’s called caffeine clearance, that’s a measurement of how well your phase one detoxification works and that’s the first part of your detoxification system. If that’s a bit gummed up by all the other things that are happening, then if you’re somebody who drinks a cup of coffee in the morning and you can’t sleep at night that’s not a good thing for you.

Or if you’re somebody who works their jobs and is flogging a tired horse that’s also not such a great thing to do. Will I take it away because people are like take anything away but don’t take my coffee away.

I’ve said it before… even on “simple” things, the experts rarely all agree!

What does that tell us?

Small Intestine Bacterial Overgrowth is super complex – and no two cases are the same. There’s no one protocol that works for everyone: healing SIBO is a different path for each of us.

How do we find the right path?

I believe the answer lies in getting as much information from the experts as we can. Then, we can lean into our own innate wisdom to find what works for us and what doesn’t.

I created the SIBO SOS™ Speaker Series to help bring you ALL the latest information on SIBO – right to your home.

For the rest of 2019, we have 10 expert Speaker Series Masterclass and Q&As scheduled. For a super limited time, you can buy the 2019 Speaker Series and get access to all TEN Masterclasses & Q&As for one very low price. Just $19.80 per Masterclass!

Get the Speaker Series HERE.

Not interested in all 10? You can always buy each Speaker Series Masterclass and Q&A individually for $59.

P.S. Is coffee a friend or foe to you? I’d love to hear YOUR experience. Please leave us a comment!

26 thoughts on “What 7 SIBO Experts Think About Coffee (Is Coffee Friend or Foe For SIBO & IBS?)”