Dr. Mark Pimentel on Fiber, The Low-FODMAP Diet , and What To Eat During SIBO Treatment 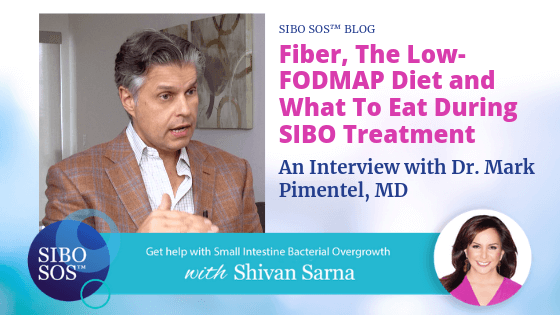 I had just walked into Dr. Mark Pimentel’s office for my first appointment when his nurse looked up and said that.

At first I thought she mistook me for a celebrity (we were in Los Angeles at Cedars-Sinai hospital after all!).

But actually, she was just surprised because Dr. Pimentel hardly ever takes on new patients anymore.

Between researching, teaching, running his own laboratory and directing the Medically Associated Science and Technology (MAST) Program, and treating his existing patients (who have some of the most complex GI conditions in the world) he’s a pretty busy guy.

I was very, very lucky to be able to get an appointment (and to have the resources to fly clear across the country to see him, too!)

That first appointment was life-changing – and every time I’ve encountered Dr. Pimentel since then has equally enlightening.

If you’ve ever heard him speak, you know that Dr. Pimentel has a way of speaking that is direct, concise, and simple to understand – even when he’s talking about crazy-complex concepts.

Today, I’m going to share some of what Dr. Pimentel taught me about fiber, the low-FODMAP diet, and what to eat during Small Intestine Bacterial Overgrowth (SIBO) treatment at one of our last sit-downs.

And if what you learn in this blog post is helpful, make sure you check out Dr. Pimentel’s Masterclass.

Shivan Sarna: People are wondering about SIBO and fiber. How do we get enough?

Dr. Mark Pimentel: The bigger question is, what is enough fiber and do we really need fiber?

The question other than that is, after eating cardboard for 20 years, have we made an impact on colon cancer at all?

A lot of people have been eating fiber because they think it’s healthy and then, now, everybody’s going Paleo and going to even keto diets, and all these diets seem to be even healthier than high-carb diets.

I don’t know that you need a lot of fiber in your diet. I think fiber can be helpful in terms of if you’re a normal person and you want a nice, smooth bowel movement and maybe fiber to help the beneficial bacteria of the colon, have more food.

For SIBO, fiber is no good either.

MP: No bueno. It’s just a lot of fermentation, a lot of gas, and a lot of trouble.

SS: Let’s talk about the low FODMAP diet and how we don’t want to allegedly be on it for a really long term because it reduces the variation of the microbiome. Do you agree with that? Should we be thinking about that?

MP: Fiber, yes, leads to more diversity in the colon. But as I’ve said before, if you put fiber in the gastrointestinal tract like beans, it’s going to take a lot longer for cleaning waves to recover. It’s going to take a lot of time for the fiber to evacuate from the small intestine leaving more fermentables there for gas, bloating, and distention.

But, the low-FODMAP diet is not healthy long term, and even those who discover and continue to discuss low-FODMAP diet have suggested that. Bill Chey from Hanover, Michigan presented at the ACG Meeting the first study looking at how bad is it to be on low-FODMAP [long term].

After three months, you start to see micronutrient deficiencies. It is not a long-term solution to IBS, which is what it’s touted for. SIBO was kind of the extension of it.

Now, it can be helpful. So, I kind of tell people, “If you don’t eat any food at all, your SIBO will disappear,” because the bacteria can get no food – but that’s not a solution.

The more you restrict calories, the more better your SIBO will feel. But then you’re going to cause harm to yourself, so you’ve got to find that best practice for you, which is why we sort of developed the low-fermentation diet.

We developed that in 2001 or something, and it’s meant to be 100% recommended daily allowance of all mineral and vitamins, so that you don’t get the deficiencies, and yet calorie-restrictive enough to help SIBO.

What To Eat During SIBO Treatment

SS: When you’re taking Rifaximin or treatment [for SIBO], you say, “Eat whatever you want because we want the bacteria having a party,” so that they’re out and about, so the medicine can do its job of killing it. Is that right?

MP: Yes. [But] I don’t tell people to go and eat like a gallon of Haagen-Dazs ice cream every day to make their SIBO go away!

You want to be a little more open with your diet during SIBO treatment, that’s what I suggest. [But if you go too far] What ends up happening is you’ll feel worse on the treatment thinking that the antibiotic is making it worse, when it’s actually the diet.

I just tell people, just go about your normal business, eat what you normally eat while you’re taking the treatment. You don’t need to hyper activate the bacteria.

SS: Nor would you suggest like really being super strict on a low-fermentation diet?

MP: I would suggest not to be on a low-FODMAP diet while you’re taking the antibiotics because you are restricting calories to a great extent and bacteria will tend to be more resistive to antibiotics in hibernation.

Anytime I have a conversation with Dr. Pimentel, things that I thought were so complex – like what to eat during treatment – become crystal clear.

He has a true gift for teaching from a patient’s perspective!

That’s why I’m overjoyed to welcome Dr. Pimentel back for another Masterclass!

My mission at SIBO SOS™ is to connect as many IBS and SIBO patients as possible with the very best doctors in the world.

I have spent more money than I want to think about trying to find out what was “wrong with me.” SIBO is an expensive condition and takes so much time and energy.

But I also want you to know, I’m in it with you.

So while we can’t all see Dr. Pimentel in person, there is still a way we can all learn from him directly: it’s our Masterclasses!

Myself and the entire team at SIBO SOS™ work diligently to make these programs as accessible and affordable as possible.

Information and Inspiration.. Both are needed to get well.

P.S. Lately I have heard from some people that there is “too much information.” I have felt that way myself at times. My goal is never to overwhelm you, but it is also my calling to share as much as I can! Please, take what you need and leave the rest!

P.P.S. Do you have any suggestions for overcoming the “overwhelm” that comes with a condition like SIBO? Please share with us in the comments.

13 thoughts on “Dr. Mark Pimentel on Fiber, The Low-FODMAP Diet , and What To Eat During SIBO Treatment”