Being sick is bad enough…

But being sick without knowing WHY or WHAT is causing your symptoms is truly torturous.

And for millions of people with gut health problems, it has been their reality.

This was my story, too: since I was five years old I have struggled with gut problems. I bounced from doctor to doctor and tried every treatment you can imagine (with varying success) before finally being diagnosed with Irritable Bowel Syndrome in 2013 and with Small Intestine Bacterial Overgrowth in 2015.

I know firsthand the pain of undiagnosed gut problems! That’s why I am really excited about a new development in the testing and treatment of gastrointestinal disease that could potentially change this reality for so many people!

Until recently Irritable Bowel Syndrome (IBS) was a “diagnosis of exclusion.”

That meant that if you had IBS symptoms like:

Your doctor couldn’t diagnose you with IBS until they had ruled out other causes like:

The process of testing for these other diseases could be costly, risky, and time consuming, including:

When all those other causes were ruled out, your doctor could finally tell you that you (most likely – not conclusively) had IBS.

My symptoms were so bad I actually ASKED for a colonoscopy! I was in so much pain, I knew there had to be *something* going on. I was devastated when my doctor told me the results of my colonoscopy were totally normal. It gave me the strangest feeling: why am I frustrated that I had a good result on my colonoscopy? (Eventually I was relieved the results were normal, of course.) But at the time all I wanted was a DIAGNOSIS! I wanted a name for what I was experiencing.

Why Has IBS Been A Diagnosis of Exclusion?

Until now, IBS has been a “diagnosis of exclusion” because doctors didn’t know what caused IBS in the first place.

Without identifying the root cause of IBS, they couldn’t test for it – so it had to be diagnosed by exclusion.

That’s how I wound up diagnosed with IBS in 2013: the doctors couldn’t find any other root cause for my bloating, food intolerances, and digestive pain.

But all that has changed thanks to groundbreaking research completed in part by Dr. Mark Pimentel and Dr. Kapil Gupta of Cedars-Sinai Medical Center. They discovered that in a significant number of cases diagnosed as IBS, the root case was food poisoning. (And about 1 in 9 people who get food poisoning then develop IBS!) It’s called post-infectious IBS. (And they’ve created a way to test for it!)

How Does Food Poisoning Cause IBS? Here’s how the folks at ibs-smart™ explain it:

It has to do with a toxin called Cytolethal Distending Toxin B, or CdtB for short. It turns out that every one of the most common bacteria that cause food poisoning releases CdtB.

When a toxin like CdtB enters your body, your immune system fights back with an antibody – in this case, anti-CdtB.

Anti-CdtB can confuse your body into developing another antibody called anti-vinculin. This harms a naturally occurring protein in your body called vinculin that helps cells migrate and connect to each other.

This is an autoimmune response and leads to gut nerve damage and improper functioning of the Interstitial Cells of Cajal (ICC) and Migrating Motor Complexes (MMC), which regulate the contractions of your gut.

This can ultimately result in Diarrhea-Predominant and Mixed-Type (Diarrhea with Constipation) Irritable Bowel Syndrome, sometimes many years after the initial infection.

That means anyone who has ever eaten a questionable salad or sandwich that sat out too long is at risk of developing IBS! (Even if you haven’t had food poisoning in years.)

Does This Test Work for SIBO Too?

I knew you’d ask that!

The answer is a bit complicated.

There is so much overlap between Small Intestine Bacterial Overgrowth and IBS. Dr. Steven Sandberg-Lewis says 75% of people with IBS have SIBO. And we know food poisoning is a major root cause of SIBO too.

Bottom line: whether you’ve been diagnosed with SIBO or IBS – or neither one yet! –  I think this test is incredibly valuable. It can change your entire path of healing. 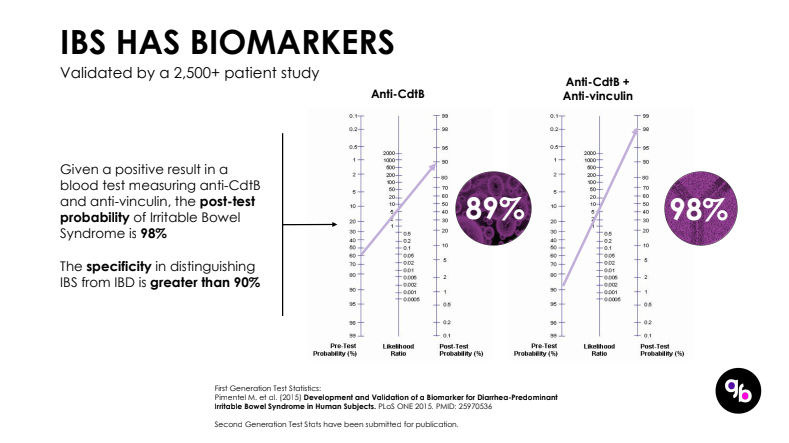 It’s a simple blood test your doctor orders for you – and it can definitively tell you if you have post-infectious IBS.

Why This Is So Important

Knowing your root cause can save you years of uncertainty, potentially risky medical procedures, medications you don’t need, and a lot of heartache.

Personally, once I knew *for sure* that I had post-infectious IBS, it was like things clicked in my brain. I knew the post-infectious IBS was causing issues with my motility -so I finally started using a prokinetic religiously. BINGO – a huge reduction in symptoms for me.

Get The Test (At A Discount with Online Prescription)

And even MORE good news – now you can order the test kit with an online prescription and get answers right away!

Get 25% off your ibs-smart™ test here! IBS Smart Test by using the coupon code “sibosos2021” upon checkout

Outside the United States? Go here to get the test: Get an IBS blood test internationally

Then pop into the comments and tell me what you think. Do you have (or suspect) post-infectious IBS?

P.S. There has been so much buzz about this test in the SIBO SOS™ community and on Facebook, so I wanted to get accurate info about this test out and set the record straight. I hope this was helpful to you!